Canberra, Australia – Australia’s highest court on Tuesday quashed Cardinal George Pell’s convictions for child sexual assault paving the way for the 78-year-old to be released from prison, a decision experts warned could further undermine survivors’ trust in the court system.

The judgement was read by Chief Justice Susan Kiefel to a near-empty High Court in Brisbane with only a handful of journalists and observers allowed inside due to coronavirus social distancing regulations.

In a modern touch, the court tweeted and published its decision, which was unanimous, online. The High Court’s website crashed shortly after the judgement papers were uploaded.

Pell is expected to walk free later today from his jail cell in Victoria’s Barwon Prison, where his lawyers told him the news. The decision means there are no further avenues for this legal process, although new charges could be brought by other accusers.

The High Court found that, based on the evidence put forward, the jury should have found that there was reasonable doubt as to Pell’s guilt.

There was “a significant possibility that an innocent person has been convicted because the evidence did not establish guilt to the requisite standard of proof,” the bench found.

A statement issued by Pell shortly after the judgement said that he had “consistently maintained my innocence while suffering from a serious injustice”.

“My trial was not a referendum on the Catholic Church,” Pell added.

Advocates for survivors of abuse said they were shocked by the decision to let Pell free.

“We naively didn’t see it coming, we were confident that what was right would stand up in this case,” said Rachael Burgin, a lecturer at Swinburne Law School and co-director of Rape and Sexual Assault Research and Advocacy Initiative (RASARA).

“Today is a difficult day for survivors from across the board of sexual violence and gendered crime,” Burgin told Al Jazeera.

“Unfortunately, this decision justifies all the lack of trust survivors have in institutions. That impact will be far-reaching. People will be scared to report abuse.”

Australia’s most senior member of the Catholic clergy, Pell was found guilty of two charges of sexual assault in December 2018. He was sentenced in March the following year to six years in prison with the decision later upheld by a three-judge panel in Victoria state’s Court of Appeal in a split 2-1 verdict.

Both of Pell’s alleged victims were 13-year-old choirboys when they were abused in the mid-1990s. Pell was the Archbishop of Melbourne at the time and has maintained his innocence.

Pell had previously described the allegations as a “product of fantasy” and “absolute rubbish”.

Pell’s legal team argued that the original judges hearing the case placed too much weight on the credibility of Pell’s accuser. They argued that testimony from multiple witnesses raised sufficient doubt about how the crimes could have taken place and that such evidence was downplayed by the Victorian court.

Senior Catholic figures who served alongside Pell at Melbourne’s St Patrick’s Cathedral where the crimes were alleged to have taken place, said in their testimony to the court that Pell would not have had sufficient time alone with the choirboys to abuse them. 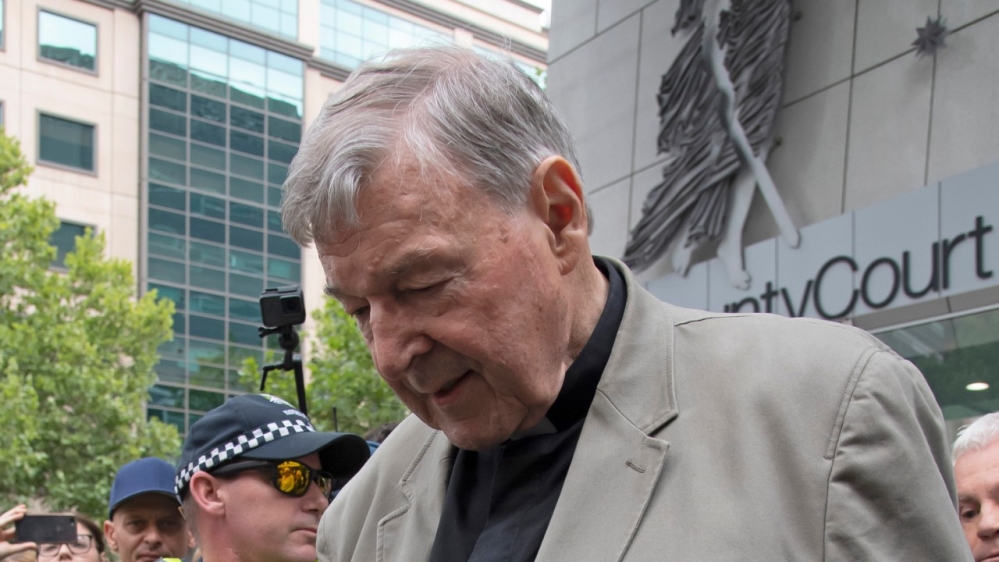 Pell leaves the County Court in Melbourne last February after he was found guilty of child sex abuse. The convictions were overturned on Tuesday [Andy Brownbill/ AP Photo]

Pell’s accuser said he and the other choirboy were molested in the cathedral’s sacristy, the room where priests prepare for services.

Additional allegations have long been circling the cardinal. Just this week, Australia’s national broadcaster ABC revealed that two more victims had come forward, saying Pell sexually abused them as boys in the 1970s.

“He was clearly not a liar, he was not a fantasist, he was a witness of truth,” Mr Boyce said.

“Pell’s conviction depended on the testimony of a single surviving victim,” she said. “For survivors, what’s absolutely critical is being believed and having your experience validated … a finding [like this] that negates their own experience is fundamentally annihilating.”

RASARA’s Burgin added that although many Australian states and territories have revised or are in the process of revising their laws on sexual and gendered abuse, there remains much to be done.

“What it tells us is that what we’ve been saying is correct – the system needs drastic reform and it needs it now,” she said.

‘Unacceptable’ losses of older trees in 2019

Trump vows to send in troops to end unrest